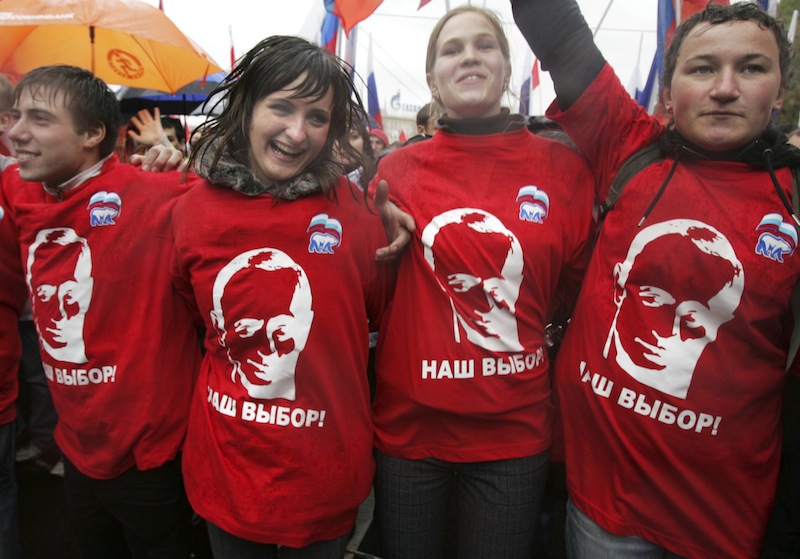 By Ana Singh on November 19, 2014
It’s easy to see why Russia’s ultranationalist youth groups have earned comparisons to the Hitler Youth. Masterminded in 2005 by Kremlin ideologist and later Deputy Prime Minister Vladislav Surkov, Nashi (“Ours” in English) soon became the largest among the pro-Putin youth groups. In its heyday, it was some 100,000 members strong. Nashi members attended patriotic summer “training camps,” led massive, mob-like pro-Putin rallies with violent chants and drumming, accused foreign ambassadors of subversive activities, and even “set up an installation that featured the decapitated heads of certain Russian opposition leaders and Western politicians…wearing caps with Nazi symbols.”

However, Nashi’s ideological fervor and paramilitary behavior was at least easy to watch and, for the well-educated, easy to discount. Reflecting the general lack of transparency common with Kremlin-associated groups, there is little specific information about why Nashi began going downhill. Perhaps realizing the growing ineffectiveness of Nashi’s brand of zealotry, Nashi’s leader stated in 2012 that the organization would be officially dissolving. However, it’s the phoenix that rose out of the ashes of Nashi that should scare proponents of democracy worldwide. “Set,” Russia’s new Kremlin-backed youth movement, is frightening because it attracts the urban, educated, less ideologically fervent young people who could have as easily been marching against Putin in years past. It also eschews violent demonstrations and jingoistic speeches in favor of creating art and culture to quash rebellion against the regime. Both of these aspects promote the longevity of an oppressive regime in Russia, regardless of who heads it.

By orienting itself toward a more sophisticated crowd than Nashi, Set strategically converts “an urban-hipster creative class that was in revolt” into Putin supporters. They do it by using noticeably different techniques than their predecessor; as Foreign Policy writes, “Set isn’t interested in rough-and-tumble street politics: banging drums at massive rallies or drowning out the opposition at protests.” Instead, it wants to “recruit creative youth.” The impacts are visible in the kinds of events led by Set members—everything from film shows to street exhibits. Cleverly, this is more subversive than Nashi’s approach, allowing Set members to use art as a “hook” to draw in peers who might be more on the fence on ideology and would be alienated by the zealotry nature of Nashi activities. Particularly vulnerable are those who grew up in a post-Soviet era, never directly facing the deprivations that reminded older citizens why it was important to be vigilant about the Kremlin’s impositions on their civil liberties in the modern day. Russian journalist Grigory Tumanov, writing for the Kommersant, said that Set appeals to a generation that “doesn’t know about politics” and “just wants to dress nicely and draw graffiti.”

The idea of a pro-government Russian youth movement using art is especially jarring with consideration of the history of art as an instrument of Russian dissent. Aleksandr Solzhenitsyn used poignant writing to criticize the cruelest excesses of the Soviet regime; Anna Akhmatova saw her poetry banned by government officials for being too “bourgeois” or provocative. Set disguises art and culture as instruments of patriotism, instead of instruments of quashing dissent. We naturally associate art with free expression and freedom of speech. Thus, by aligning art with pro-government sentiment, Set aligns conformity with “edginess” and freedom. Beyond these ideological acrobatics, Set manages to create an entry into the art world, or at least the market, for some of its members. Foreign Policy described a 25-year-old named Roman Putanov, whose connection with Set helped him connect with a company and subsequently start selling his woodwork products. Set also provided incentives to artists with contests, like one, Images of Russia, that asked participants to imagine a Russian answer to “I <3 NY”.

If one was to look purely at Set’s art activities—murals, contests, and the like—it would be easy to pass it off as a harmless group that simply encourages Russian patriotism. However, the problem inherent to Set, and groups like it, is that the ideology young people are encouraged to promote is much more than patriotism. Set’s online manifesto (translated by Alex Ianchenko) contains a “moral principle” section declaring its opposition to same-sex marriage, declaring that children in homosexual families will grow up to be homosexual. It advocates the defense of “traditional Russian religions,” of which they say there are only four: Orthodox Christianity, Islam, Judaism, and Buddhism. It does not accept Baptism, Shamanism, Protestantism, or the “cult of Cthulhu.” This has worrying implications for religious freedom and the persecution of religious minorities.

Perhaps most alarmingly is the racism expressed in their “Cultural Principle” section. Though it never uses the phrase “master race,” the thinking behind it is strongly implied. Set writes that languages are the programming software of the brain and that only certain languages are capable of doing certain things.

Were it not so clearly racist, Set’s cultural principle could be seen as a more extreme spin on Benjamin Whorf’s theory of linguistic relativity; indeed, it is possible that they were trying to allude to it. But they take it significantly further than saying that the language you speak affects cultural and thinking patterns, actually using language differences as a defense of the status quo in Russia:

“Now we will suppose that several operators of a second language found themselves in one programming language […] And that is what’s in our language, into which many other operators of other languages found themselves—“democracy,” “tolerance,” “electorate.” It is impossible to build a democracy without the people within if the people do not carry it in their blood. These words demand exchange into Russian equivalents or throwing away, but our program will definitely not work correctly with these words.”

In other words, they believe that democracy and tolerance are culturally incompatible with the Russian population. Eurasian politics expert and Berkeley professor Edward Walker said, “I do think that both the Russian political elite and the public have become pretty deeply illiberal,” pointing out that many in Russia see “Western liberal values” like tolerance and gay marriage as threats to traditional values.

When considering that members of the group define their political views as “Simple: we are for Putin” (and created an alphabet learning aid for elementary-school children that includes “P is for Putin”), it is tempting to blame their ideological extremism on the hero worship of Putin. However, as Professor Walker commented, “A lot of where Russia is now does not come just from Putin. The trends were there before Putin, most of them. Certainly Putin has helped take Russia down the particular path it’s on, but had he never appeared on the historical stage, I think much of this would have happened anyway.” Youth groups like Set are threatening regardless of Putin’s status as a power player. Positive associations with neo-Soviet ideology due to experiences with shaping art and culture, and the co-opting of an educated class of young people who might have otherwise been some of the Kremlin’s strongest detractors, means an entire generation willing to be complicit in the further erosion of human rights in Russia and beyond.