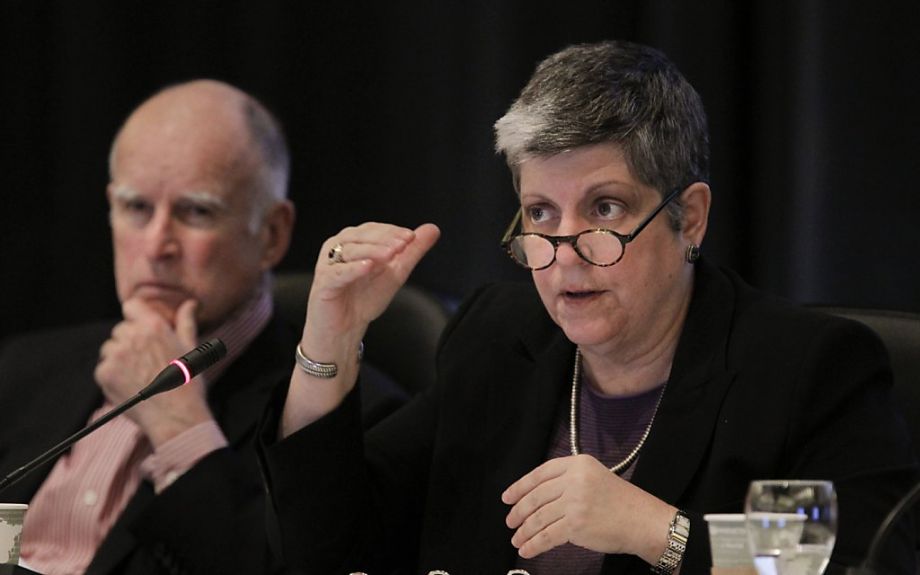 On September 20, 2013, Janet Napolitano began her tenure as the 20th president of the University of California system. Since then, she has engaged in numerous policy discussions, most recently on tuition and enrollment reform, sustainability investment, gender inclusivity, and sexual violence across UC campuses. While she has successfully established the foundation for progressive policies, such as the voluntary implementation of the provisions for the Survivor Outreach and Support Campus Act (SOS Campus Act), which would place advocates on UC campuses to support victims of sexual assault, Napolitano’s first term could hardly be interpreted as smooth sailing. With a year marred by protests and attrition, the question is whether her administration will be able to implement these policies, which are inherently ideologically controversial.

Napolitano’s employment is unique and distinct from that of previous UC presidents. Rather than coming from another collegiate institution, she hails from a robust political background; she previously served as both the governor of Arizona and the head of the Department of Homeland Security. Napolitano’s controversial appointment ensured that most people would have some opinion of her, if not a strong one. With an apparent lack of familiarity with the education system, Napolitano faced fierce opposition among the University of California community. Her appointment was protested and numerous UC student governments, such as the Associated Students of the University of California (ASUC) at Berkeley and the Undergraduate Students Association Council (USAC) at UCLA, considered votes of no confidence in regards to her appointment, citing the problematic decisions she made as the U. S. Secretary of Homeland Security. As an institution comprised of numerous undocumented students, the University of California hosts students who are directly or indirectly affected by the deportation policies set forth by Napolitano’s administration, which resulted in more deportations than any other administration to date. Interestingly, several counter-protests accompanied these demonstrations. Proponents asserted that while the selection of Napolitano was imperfect, the better option is to work with her to create a dialogue for effectual change.

Heading into her sophomore year as president of an institution mired with complexities, flaws, and financial deficits, Napolitano must not only prioritize issues but also focus on implementing the initiatives started last year. She seems to have started to achieve moderate success on this point. Recently, three of the lowest paid UC chancellors received a pay raise despite the stringent and dire fiscal environment; interestingly, their salary increase to $383,160 is still drastically lower than that of their counterparts at other universities. Upon questioning the rationale behind this decision, Napolitano asserted that the raise is necessary “to get the very best chancellors we can get.” Additionally, she has advocated for the implementation of the UC Global Food Initiative, a commitment towards sustainable agriculture and food security.

Napolitano’s agenda also seems to indicate that she is willing to confront ideologically and politically divisive topics, including immigration reform and gender inclusivity. As if to prove to the nonbelievers that she can “serve as the best advocate [she] could be for UC”, she recently pushed for a UC bill that would resolve the issue of financial aid for undocumented students who would qualify but are otherwise barred from receiving money due to federal restrictions based on their immigration status. In addition, Napolitano has turned her attention towards resolving gender inequality issues on campus. On September 29, she announced a new directive that would implement gender-neutral bathrooms across all ten UC campuses in an effort to create a more LGBT-inclusive community, and in extension to alleviate sexual and gender violence against students and faculty.

It is difficult to argue against the notion that Janet Napolitano addresses controversial issues within the University of California system with boldness and resolution. In fact, it seems as if she is trying to prove to the UC community and the education community at large that her policies as a governmental leader do not necessarily reflect her vision as UC president. It is clear, therefore, that her motives come with good intentions. Yet, with an institution rooted in bureaucratic complexities, the issue now becomes whether or not she will be successful in implementing her ideas in a way that strengthens the University of California not only as a premier national institution but also a global leader in research and innovation.