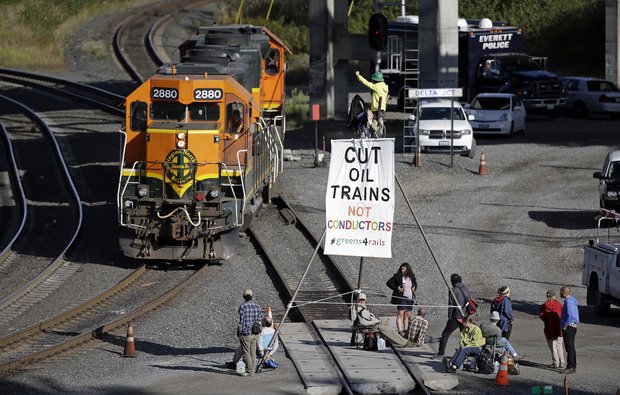 On April 18, 2014, the Obama administration indefinitely extended the review period of Keystone XL, leaving the controversial pipeline in regulatory purgatory for the foreseeable future.  The pipeline, proposed to extend from Alberta, Canada through the central US, has met fierce opposition from environmental groups. Environmental activists decry the increases in carbon emissions and form an important constituency for Democrats.  For TransCanada, one of North America’s largest energy companies, the administration’s decision represents yet another setback for the much-maligned pipeline, whose delay will only exacerbate the problems in America’s energy infrastructure.  Without additional pipeline infrastructure, oil companies have increasingly begun shipping oil by rail, a potentially dangerous practice.

While the administration drags its feet, the issue presses on.  The lack of a pipeline to support oil production has led to more direct problems.  Oil companies have routed around the lack of pipeline infrastructure by buying up ever-increasing shipping capacity.  About 400,000 carloads of crude oil were shipped in 2013, up from 9,500 in 2008.  “Pipelines-on-rails” have generated significant problems in oil-producing regions of the United States and Canada.

Shipping oil by rail is considerably more dangerous than shipping via pipeline.  In 2013, 47 people were killed in Lac Megantic, Quebec, after a train derailed and subsequently exploded.  A State Department analysis showed that increased traffic due to trains shipping oil that would have gone through Keystone XL would cause 189 additional injuries and 28 additional deaths per year.  The New York Times further noted that these derailments and accidents have led to more than 1.15 million gallons of oil being spilled last year, compared to 800,000 in the entire period from 1975 to 2012.  Faced with the prospect of increasing oil train derailments and spills, the environmental argument may actually lean towards Keystone XL.  Pipelines are a less carbon-intensive and more energy efficient way to ship oil, and most analysts agree that pipelines are more reliable than oil trains, although some contend that pipeline spills that do occur tend to be larger, complicating the analysis.

Oil trains also have a significant impact on local economies.  The high demand for trains to ship oil crowds out their use by farmers and other businesses.  In North Dakota, some of the railroads have order backlogs over 1000 cars long.  Losses due to distorted prices and rotting product are expected to be in the $10s or $100s of millions.  Rail traffic carrying oil increased 166% from the first quarter of 2012 to the first quarter of 2013.  However, grain deliveries were down 21.8% and metallic ores and minerals were down 10%.  Along with significantly damaging agriculture, this is also a problem for the nation’s food producers, who will suffer from an inconsistent supply of foodstuffs.

The Canadian oil fields that would be primarily served by Keystone XL are sources to bitumen, also known as oil sands or tar sands, which have well-to-wheel emissions 14-20% higher than the average fuel.  An analysis done by Maximilian Auffhammer of the University of California, Berkeley concludes that not constructing Keystone XL would cause a shortage of transport capacity by 2024, leaving at least 1 billion barrels in the ground by 2030, approximately equivalent to 50 days of US consumption.  This amount is neither insignificant nor staggeringly large.  Dr. Auffhammer furthers in his paper Keystone XL and the Development of the Alberta Oil Sands that, “This scenario [where all proposed pipelines are built and rail capacity is expanded] also has plenty of spare capacity until 2030 and would minimize the need for railway transport until the end of the period.”  Therefore, constructing Keystone XL and other pipelines would reduce dependence on oil trains.

Because Keystone crosses international borders, it requires State Department (and ultimately presidential) approval.  In 2012, the pipeline was the subject of significant political maneuvering: Congressional Republicans set an early deadline to try to force the President to either alienate members of his own party by accepting the proposal or give Republicans a fresh talking point for the November elections by rejecting it.  The President chose to reject the proposal; however, he allowed TransCanada to reapply with a new route that did not cross the sensitive Nebraska Sandhills.  TransCanada refiled, but the pipeline remains under review.

Many Republican politicians have made statements in support of the pipeline, citing the economic benefits of the pipeline and the jobs lost by blocking its construction.  Democrats are split on the issue, with some hoping to strike a bargain and others wholly opposed.  Opponents of the pipeline are primarily concerned with its impact on greenhouse gas emissions, as well as environmental damage in oil-producing areas.  GHG emissions have attracted the attention and ire of many environmentalists, a typically liberal constituency.

Keystone XL occupies an awkward position in American politics, one that has little to do with the pipeline’s merits and more to do with powerful interest groups.  To Republicans, the pipeline represents energy independence and American business.  To some Democrats, it represents the yoke of Big Oil, and a potential environmental disaster, both in terms of global warming as well as in terms of oil spills.  In many ways, the pipeline has become a proxy for ideological battles in Washington.  The decision on Keystone XL represents a lose-lose situation for President Obama.  Reject it, and Democrats risks being painted as anti-business and anti-jobs in the midterms.  Accept it, and environmentally-minded citizens, a key constituency, may stay home.  Better to simply keep the pipeline in administrative purgatory.

Unfortunately, President Obama can only punt this issue so far down the road.  He avoided dealing with it in the 2012 election season and he is now delaying it until after midterm elections.  At some point, he must come to a decision and accept the political consequences.  The political situation is admittedly difficult to navigate.  But the risks associated with oil trains, supply constraints, and environmental issues must be addressed, and not just for Keystone XL.  Until the President makes a move, U.S. energy issues will only grow.

Updated Nov. 21, 2014: The Senate has narrowly defeated Keystone XL by a 59-41 vote (with 60 needed for approval).  This does not, however, prevent the pipeline from being approved in the future, particularly with Republicans in line to take control of the Senate.