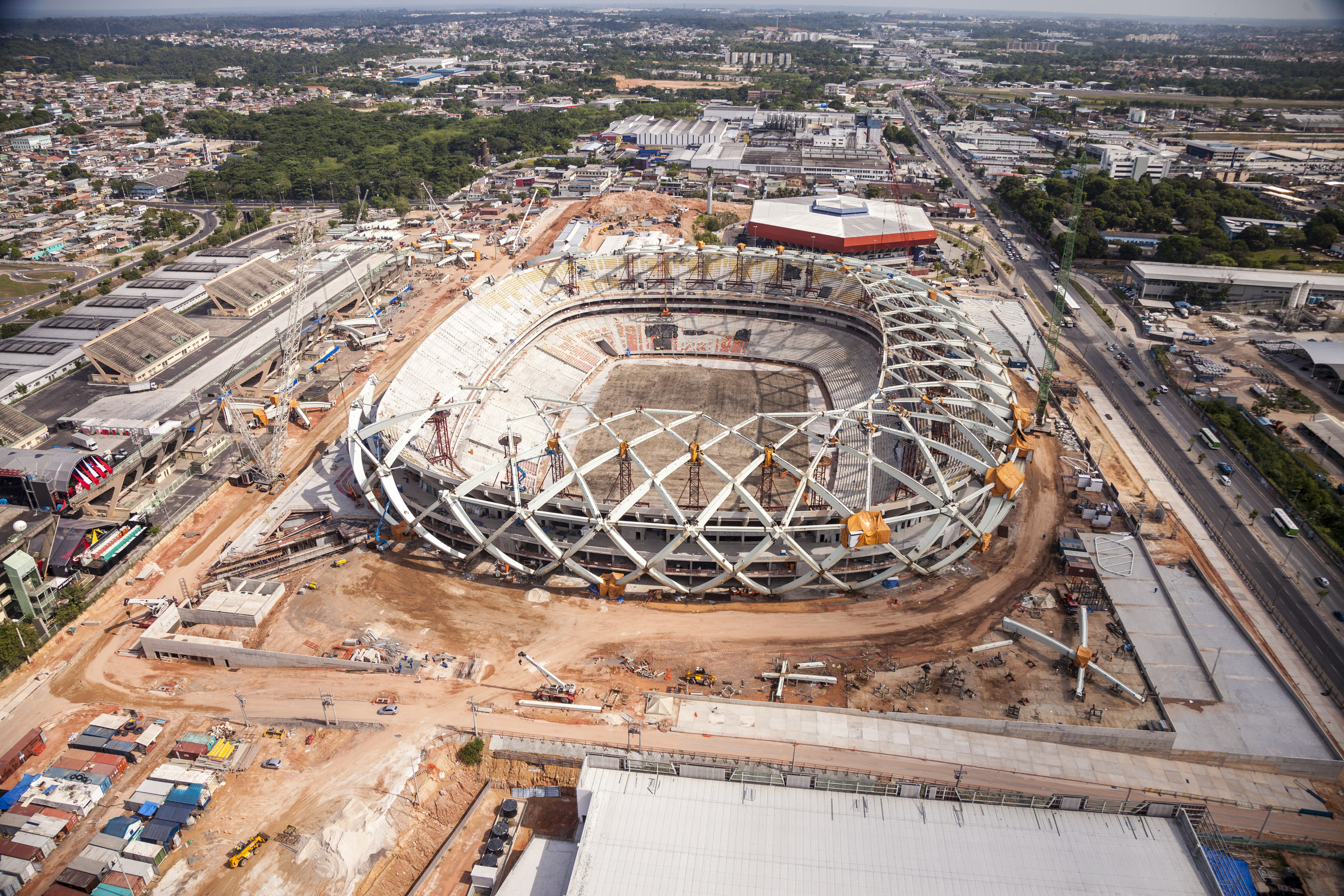 The 2014 FIFA World Cup hosted in Brazil has been the most popular one yet. One Brazilian channel attracted a whopping 42.9 million viewers for a single game, the largest global sports viewing audience this year. The ESPN World Cup coverage even broke national records in the United States, a country with significantly fewer soccer fans. This year’s World Cup also heralded the largest social media hype any sporting event has ever created, leading to “more than 3 billion interactions on Facebook and 672 million messages on Twitter.” Brazil was, in every sense of the phrase, the center of global attention this summer.

Now, however, the grand stadiums built for the games lie fallow, sitting as white elephants. But this is not just happening in Brazil, or even in other host nations of the World Cup like South Africa. In this game of global hopscotch, in which large international sporting events jump from one country to the next, the grand stadiums built to host such events are consistently forgotten.

The 2014 World Cup provides the most recent example of this trend. Located in the heart of the Amazon, the World Cup stadium built in Manaus took $300 million to build and has failed to find a permanent use. Manaus doesn’t house a single top-division team, and its most popular club, Nacional, “plays in the fourth division and draws just a couple thousand fans a game.” Given the stadium’s 44,500-seat capacity, such numbers are alarming. Stadiums like the one in Manaus cannot find a permanent use because they are too expensive for small local teams to use.

This isn’t a new trend. The 2004 Summer Olympics held in Athens, Greece left a similar mark on the host nation. After spending a then record-breaking $11 billion on the games, Greece now struggles to find a use for its grand stadiums that are beginning to, quite literally, crumble. This new breed of Greek ruins includes several individual stadiums built specifically for niche sports like softball and kayaking, as well as massive arenas like the Helliniko Olympic Complex. The Helliniko Complex, once the center of the games, is now in need of private investment to cover maintenance costs. While select athletes continue to use the facilities for training, most stadiums have been collecting dust as weeds continue to settle in their arenas and dirt collects on their seats. Some blame the exorbitant cost of the 2004 Olympics to be a driving cause of Greece’s economic capitulation in 2010, even after the wildly popular games attracted tourists and foreign investors.

In 2010, South Africa spent nearly $2 billion on six stadiums built to host its World Cup matches after FIFA refused to allow it to use renovated stadiums in more impoverished districts, which could have benefited from the economic stimulus brought by reconstruction. The costs of maintaining the stadiums are extremely high, and they are rarely used, with the exception of the occasional soccer match or music concert. Then, there is the stunning Bird’s Nest Stadium built for the 2008 Summer Olympics in China, which cost $480 million to construct and continues to require an annual $11 million in maintenance costs. While the Chinese have made several efforts to make use of the stadium, it continues to burn a hole in the government’s pocket.

Despite these economic challenges, nations continue to enter fierce bidding wars to host events like the Olympics or the World Cup because they are often popular amongst domestic voters, particularly in economically healthy nations. Hosting such sporting events is arguably the highest badge of honor a country can receive, and it is hard to resist displaying a state’s national wealth and domestic accomplishments on the global stage. More recently, bidders for Olympic and World Cup games have been citing potential profits from increased investment and tourism as reasons to host the games. However, there is little data that directly links a nation’s post-sporting event economy to revenue brought directly from such games, particularly in poorer nations.

Of course, there are exceptions. It is likely that more developed nations that can easily afford the games would not have to deal with the same economic burdens as those imposed on rising powers like South Africa and Brazil. For example, a report by the UK Trade and Investment Department argues that the 2012 Olympic games have brought the country a “£9.9 billion trade and investment boost.” Given that the games cost about £8.9 billion, the report implies a £1 billion profit from hosting the event. Nonetheless, the report should be taken with a grain of salt, as it was published by a government entity meant to promote investment in the nation, and there is no way to know whether or not the trade and investment was directly brought about by the games. Despite these caveats, London’s story is a rare glimmer of hope, as most nations pay increasingly exorbitant sums to host international sporting competitions for the prospect of reaping both short and long term economic benefits. Achieving the kind of success gained from the London games is something not every nation can afford, but may be possible with the right planning and proper economic conditions.

Leaving these new financial arguments aside, the primary driver behind hosting worldwide sporting events has been to bolster the reputation of the host nation. However, even that logic has backfired in recent years, as the events have placed host nations under greater political scrutiny during the games and have drawn increased international attention to their internal social and political conflicts. Expensive stadiums intended for one-time use have recently begun to stir political outrage, damaging host nations’ reputations as evidenced by the 2014 World Cup. Brazilian protesters drew international media attention to the nation’s income disparity during the months leading up to the event and the protestors even attempted to block the World Cup games, sporting signs reading slogans like “FIFA go home.” The protesters, outraged by government corruption and the exorbitant costs of the games in the midst of intense income inequality, only hurt the Brazilian government’s international image leading up to the games and made it difficult for local businesses to thrive off of the event.

When Russia hosted the 2014 Winter Olympics, a significant number of protestors from around the world criticized Russia’s controversial anti-gay laws through a combination of vocal and visual criticism. Significantly, many Olympians also criticized the Russian government through movements such as the Principle 6 Campaign launched by a coalition of Olympic athletes and human rights campaigns to challenge Russian policies on LGBTQ rights. The protests antagonized Putin by bringing an issue previously confined to a receptive domestic audience to the forefront of global human rights discussions. Smaller scale protests also broke out in Chicago, in 2009, when protesters expressed concern that the city’s bid for the 2016 Summer Olympics would entail widespread displacement and high economic costs while yielding low returns. As nations spend more money on security for each international sporting event, costly stadiums become even more difficult to afford. While lavish venues may boost a nation’s tourism revenue, they have begun to tear away at the host governments’ image, both at home and abroad.

Given the harsh economic and political consequences of hosting international sporting events, a more realistic goal would be to make such games more sustainable over the long term, so that the money spent on sporting infrastructure serves as an investment, not an economic waste. How, then, should such stadiums be used? Utilizing the venues for more local sports teams is the logical solution, but that’s nearly impossible for remote stadiums like the one in Manaus.

The answer, then, may lie in innovation. As part of the global 1Week1Project, architects Axel de Stampa and Sylvain Macaux have suggested that the Brazilian World Cup stadiums be converted into modular housing units. The plan maps out a Brasilia stadium with tiny cube-like housing structures suspended by the enormous beams that hold up the stadium. The plan would use “350 modular units to house more than 1,000 people, varying in size from 50 to 150 square meters,” which would help solve Brazil’s growing public housing crisis. While the fanciful plan was rejected, it helped kick start an important creative dialogue. Perhaps it is up to innovators to engineer ways to use such stadiums and offset the exorbitant costs of maintaining them. Here one can look to the 2012 London Olympics once again — the games focused on sustainable architecture, and many of the buildings and stadiums were built using recycled materials and included temporary structures that could be taken down after the games.

In only two years, Brazil will be hosting the 2016 Summer Olympics — perhaps it’s time for cities like Rio de Janeiro to take a step back and focus on sustainability, not new stadiums. After all, the only achievement more prestigious than hosting such games is doing so efficiently.